Posted at 11:47h in Stories by Samari Utthan

INDU NEPAL in CHITWAN: No one knew where the fire started. What they did know was that it traveled faster than the wind carrying it. Within hours, 69 houses had been burnt to the ground, some of them hundreds of meters apart from each other. “It seemed like an invisible force was carrying a torch and setting houses on fire,” said a local. 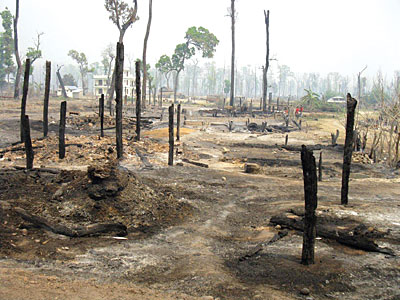 The first few weeks of April bring a sense of menace to Badarjhula, a tiny village marooned from the rest of the country in the buffer zone of Chitwan National Park. A fire rages through the village every year, carried by strong winds from nearby forests, consuming the grass-thatched wooden huts and everything in them. “There has been a fire every year since I moved here four years ago,” said Devi Gurung, an NGO worker.

Fearing another inferno on the anniversary of last year’s destruction, when 20 houses were gutted, locals went around last Friday reminding their neighbors to be careful. Some families were so scared they did not even cook their meals and ate dry beaten rice instead. But the fire came to Badarjhula anyway.

Throughout the Tarai, fire destroys thousands of hectares of forest and hundreds of houses every summer. This year has been particularly bad. The dry weather seems to make everything combustible, but the fires are usually started by farmers to promote new green flushes.

The 2600 residents of Badarjhula are especially vulnerable. Squatters in their place of origin and victims of
floods and landslides, they moved here with the end of the Panchayat era when they heard the new democratic dispensation had promised them land.

They walked through the jungles with pots, pans, and little bundles of clothing, children in tow. They said they had been told this patch of forest 65 kilometers from the district headquarters had been released for agriculture. The government disagreed and has asked them to move several times. In 2004, the army set the village on fire after warning them to leave. The residents soon returned and rebuilt their homes. Twenty years and a new People’s Movement later, they have nothing more than pots and pans in their name.

A few days before Friday’s blaze, there was a sense of optimism among the locals. A new school building had just been inaugurated a two-story concrete structure that rose from the ground like a palace amidst the one-room huts. The school was meant to meet the needs of the ever-increasing young population of Badarjhula, who had to travel an hour and a half to the nearest school in Parsa district once they finished primary school. “This is the pride of Badarjhula,” said principal A.G. Pariyar as he watched children play cricket in the grounds.

With help from local NGO Samari Utthan Sewa, the people of Badarjhula have pushed for development in other areas too. Unable to secure loans without any collateral, they started 35 savings and co-operative groups. A local health committee runs a health clinic. A landless committee represents the villagers in dealings with the government.

The new school, however, seemed the most promising. The government had offered partial funding for the school building and agreed to provide most of the teachers, giving rise to hopes that the settlement was on its way to being officially recognized.

“We hope the school is a step towards making our settlement here legal,” said Ganesh KC, who founded the first school in the village, where he taught in return for rice and eggs from the villagers. “We think the government won’t uproot it after investing in it.”

After Friday’s blaze, the school looked even taller. The houses around it had been burnt to ashes. Villagers sifted through the ruins to see if the fire had spared anything. They slept in the open and talked about setting up tents until they could rebuild. It seemed like a ritual for, after all, they have done this many times before.

Land of the landless, pictures of Badarjhula taken before the fire